One of the biggest causes of stress in relationships is money. Especially if you have different attitudes towards money and spending. So, how do you deal with it? Complete transparency with shared bank accounts, or keep everything separate so your shoe habit doesn't cause another argument?

Two of our team, Bex and Rach, chat about how they talk money with their partners. Whether or not they decided to merge their finances, what money conversations they've in their relationships - the good, the bad and everything in between! 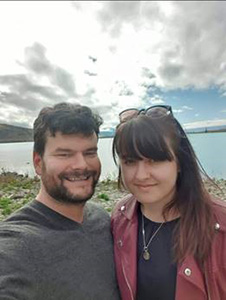 >Bex & Mark
>Together - 5.5 years
>Finance brief - Live together and have separate accounts aside from one joint account that APs for the bills go into.

Let's get straight to it, why the separate accounts?

Bex: When Mark and I met, he already owned his first home. He wanted to get into the property market as soon as he could and he’d been diligently saving since he started working as a teenager. He bought a house with his best friend and they started separate mortgages for their halves. When we met, he was living in his first home and I moved in to live with him and his friend after we’d been dating for about a year.

I’ve always been a pretty independent person and I’ve always wanted to make my own way in life. Mark earns a little more than me and had his own house, so when we moved in I told him that I want to keep our money separate and I’ll pay my own way. I didn't want any handouts. I wanted it to be clear in our relationship that Mark’s financial achievements are his own. Also, having our finances separate means he can’t complain when I come home with another new pair of shoes!

While we decided to keep things separate, we also wanted to start saving together for holidays or joint expenses so we worked out an arrangement where I’ve set up an AP for board, bills and collective savings to a joint account. We pay the bills from there and transfer the savings to Mark’s flexi mortgage account. This way it’s helping him keep his mortgage down, but it’s also really clear how much each of us has contributed.

We’re getting married in about 6 months and we’ve started to have the conversations about merging our accounts. So maybe one day we will merge but for now, it works well for us.

What is the most common conversation you would have about money? And how regularly does the conversation of money come up?

Bex: We can both be pretty thoughtless spenders at times, so we set yearly savings goals for ourselves. We make an active point of checking in about once a month to see if we’re on track or not. It's definitely not a formal thing. Usually, it’s initiated by one of us saying, I feel like we’ve spent a bit recently, let’s check in.

Have you ever argued about money? And if you have, how did you overcome that?

Bex: We don’t typically argue about money, we’re usually on the same page because we check in with each other regularly. There’s only one heated discussion that comes to mind and that was over a big joint purchase. We were talking about replacing our car with an upgraded version. We had pretty different ideas of what new car we should get when we first had the conversation. Mark thought this could be a good opportunity to buy the dream car, and I was thinking more along the lines of a second-hand car so we could use our savings for things like travel instead.

The jury is still out on this one, so for now, we’re keeping the old car and we’ll just keep revisiting the conversation until we are in agreement on what we should buy. The trick for us is making sure we take the time to appreciate the other's position when we disagree, and if we still can’t meet each other in the middle, we just park it for another day.

What's a positive conversation you’ve had around money?

Bex: Our conversations started to get more positive when we actually sat down and decided to make savings goals together. For us, the goals help us work together as a team when it comes to money and now most of our conversations are positive. Even if we’re not quite on track, it’s like a team-building exercise, we look at what’s putting us off track and we make a few action points together so we can get back on track like eating out less or no unnecessary shopping for a month.

Do you guys track your money in a certain way?

Mark: We have a yearly goal for how much money we’re wanting to save which will enable us to reach our financial goals. For interim tracking, I just see if we’re close to the amount we should be saving each month. I find having a yearly goal means we can have more flexibility in our spending and be able to absorb a month or two when we need to deal with unexpected expenses and not feel bad that you haven’t saved enough. If we are tracking under the saving amount to reach our yearly goal we can make smaller adjustments over a longer period to bring ourselves back on track.

What would you say to a new couple starting out and thinking about broaching the topic of money with their partner? Where do you start?

Bex: I’d say what really helped us was that initial conversation about how we both feel about money - make time at the start to understand each other's money mindsets and goals. Mark learnt money was a big thing for me and my independence, and I learnt he liked to have strong financial goals so that he can be carefree about day to day spending. We also both decided our immediate tangible spending goals were to try and travel somewhere once a year. Being on the same page with these things from the very start made the conversations along the way really easy. >Rach & Mike
>Together 10 years, married for 5
>Finance brief - Shared accounts within a year of being together. Own a newly renovated home. Joint accounts, requires both parties to sign for any account activity.

So, joined accounts within 1 year?! Tell us about this?

Rach: Mike and I moved in together really quickly (within 3 months) and then super quick we figured out that we wanted to go on holiday and buy a house so we figured sharing accounts to see exactly what we had together for both goals was key to us achieving this. We also thought we would look more attractive as borrowers to banks to have all our finances together to show we can manage debt and savings with one another. This was probably a little naïve on our side, but it’s worked out for the best for us.

What is the most common conversation you would have about money? And how regularly does the conversation of money come up?

Rach: It really depends on the time of the year e.g Christmas time we talk about it regularly to make sure we aren’t overspending on Xmas pressies. I would say we talk about money at a minimum on a fortnightly basis and that’s because that is when we check in once both pays are in and bills are paid to look at what we have planned over the next few weeks to make everything work and check in on how savings and other goals are going.

Mike is also a contractor so that means he doesn’t get benefits like paid annual leave and he pays extra bills like ACC, so we factor this into conversations as well. We probably talk about it way too much, to be honest! But we have some pretty big goals set and own a couple of properties so we do constantly have our finger on the pulse on how we are tracking.

Have you ever argued about money? And if you have, how did you overcome that?

Rach - I’d say we’ve had a couple of pretty big ones and it came down to being surprised about a couple of big expenses that I didn't see coming, which meant it was one of those ‘1 step forward, 2 steps back’ sort of situations. The most recent was when we had new carpet installed on our place and it ended up costing almost double what we had expected. It was easier to play the blame game than try and work out where we'd gone wrong!

Honestly, to overcome it, we just had to put it aside and revisit the entire renovation budget on another day when we weren’t fired up. A tough one for us, and I hate to admit this but, Mike and I are not the best with money. You know how typically in a relationship there is always one that is better than the other at keeping on track - yeah, that’s definitely not us! So sometimes we get it wrong and that’s when an argument can crop up.

What's a positive conversation you’ve had around money?

Mike: I immediately thought about where we have used money that we have to either do something fun or use it for good. Examples that came to mind were being in the position to support family and friends with Koha in unfortunate events, saving up for our holidays and our chats about goals and then reaching those goals. It's awesome when something we have talked about actually happens.

Do you guys track your money in a certain way?

Rach: Yeah we do, I mentioned a little earlier that Mike and I aren't the best with money, but we really have the best intentions to be and so we’ve tried a few things, a couple have stuck. The biggest thing for us though is that we don’t have any credit cards, personal loans or hire purchases. This means we might be a bit slower getting something we want, but it also means we don't have the temptation to make impulsive, "on the whim" purchases and our only debt is our mortgage.

We have a spreadsheet that outlines our key bills and we also use the Budgeting tool with Booster - which gave us a few home truths, like Mike’s coffee spending habit!

We also have 15 different accounts for each of our bills, spending accounts and savings accounts, we find this is really helpful to be able to see where our money is actually allocated.

What would you say to a young couple starting out and thinking about broaching the topic of money with their partner? Where do you start?

Rach: Chatting about what goals you have to drive the money conversation, I think is a really nice segway. For us, it was the holiday and a house and then that led to "well what do you earn...what debt do you have" and then we agreed to what we would tick off first. But having something to strive towards was for us the best way to open up the initial conversation about where we both stood financially, and how we could then support one another by merging.